LONDON (ICIS)–The international ammonia market
was relatively quiet in the first week of the
final quarter, with prices stable on both sides
of the Suez amid limited spot activity.

The restart of export-oriented plants in
Indonesia appears to have brought some balance
to the market for buyers in Asia-Pacific after
a short-term supply squeeze.

A rebound in caprolactam (capro) prices in
northeast Asia may yet boost demand and see
major buyers in South Korea, Taiwan and China
enter the spot market.

Deals involving sales out of the Black Sea were
agreed at similar prices to previous business,
with no new sales confirmed out of the Middle
East or into India.

Russian major Togliatti sold 23,400 tonnes to
Gemlik in Turkey, while about 5,000 tonnes of
Ukrainian material from Odessa Port Plant (OPZ)
was acquired by Trammo at $202.50/tonne FOB
(free on board) for November loading.

Major producers in Saudi Arabia are focused on
contract commitments this month, with regular
spot buyers like Trammo instead turning to
Egypt for tonnes.

The trader loaded nearly 50,000 tonnes of
material in the Red Sea for discharge in India,
thought to include contract and spot volume for
buyers on the west coast.

In southeast Asia, PETRONAS sold 15,000 tonnes
to BASF for discharge in China on a
formula-priced CFR (cost & freight) basis.

The Malaysian giant also agreed at least one
FOB sale to Trammo, albeit 3,000 tonnes that
was promptly discharged in the Philippines for
use in phosphates production.

In a rare move, Indonesian manufacturers Kaltim
and Parna Raya agreed a spot deal for 6,000
tonnes between them, with the former likely to
sign a similar deal with Trammo shortly.

With several large plants in Trinidad now
offline, no sales were seen out of the
Caribbean, although Trammo appears to have sold
a 14,000 tonne cargo of unknown origin to at
least one buyer in southern Brazil. 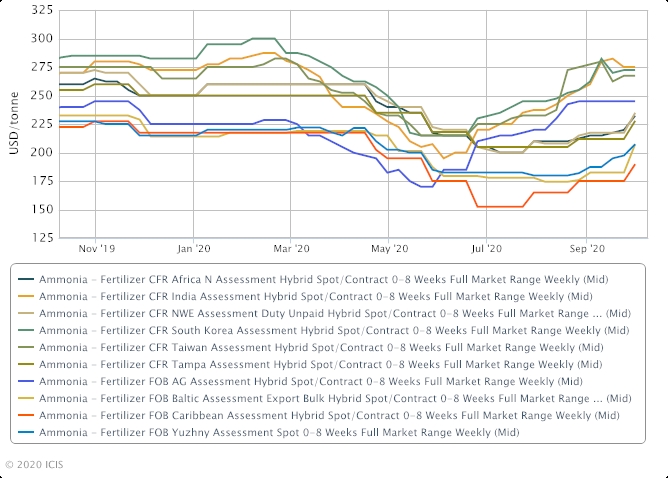