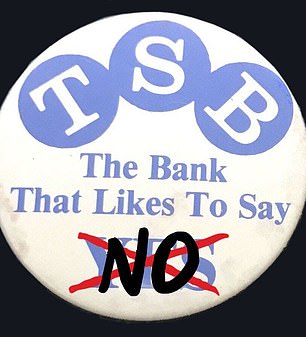 TSB once boasted that it was ‘the bank that likes to say yes’ – but it is now blowing a rude raspberry ‘no’ in the face of customers wanting to be served at its branch counters. The bank has started pulling down the shutters at 14 of its high street branch counters at two o’clock in the afternoon.

Customers coming in after this time will be asked to undergo what’s bafflingly titled a ‘digitally up-skill’ lesson rather than getting the counter service that they came in for.

In other words, they will be encouraged to bank online.

The move has been described by the banking expert Derek French as ‘cynical’. Last week, the former bank manager and founder of the Campaign for Community Banking Services, told The Mail on Sunday: ‘Limiting counter opening hours is a backdoor way of whittling away the importance of a branch.’

By withdrawing counter services at selected branches, French believes TSB is setting out to reduce branch footfall, thereby giving it an excuse at some stage in the near future to go on and shut them. He said: ‘The knock-on effect will be fewer customers and stronger justification for branch closures.’

Last month, the Financial Conduct Authority told the banks that they would have to justify future branch closures on economic grounds.

However, French warned: ‘For all the regulator’s posturing, I fear a major surge in bank closures over the coming months.’

The Mail on Sunday has long campaigned for every town in the country to have access to free cash – and the Government has promised to legislate to ensure this happens.

The withdrawal of afternoon personal banking services at TSB’s 14 branches follows in the wake of its decision to cull 82 branches this year, a step that will leave it with just 454.

It is part of a worrying trend. Over the past six years a third of all bank branches have closed, with free cash machines being removed at the rate of 500 a month.

Now some banks are citing the Covid-19 crisis as they accelerate closure programmes and cut back their opening hours.

Last week Co-op Bank announced that it would be closing 18 of its 68 branches this year due to the ‘economic uncertainty’ caused by the coronavirus.

NatWest is cutting 550 branch jobs, while Barclays and HSBC are axing 59 and 28 respectively. Lloyds has put plans to cut 56 branches on hold due to the pandemic.

Banks that have reduced branch opening hours include Santander, which has cut its hours to between 10am and 3pm – with some of its 565 branches closing at 2pm.

Just a third of HSBC’s 621 branches are open from 10am to 4pm while others close at 2pm. Most of NatWest’s 960 branches are open only between 10am and 3pm while Lloyds Banking Group – including Lloyds Bank, Halifax and Bank of Scotland – has restricted branch opening hours to typically between 9.30am and 3.30pm. 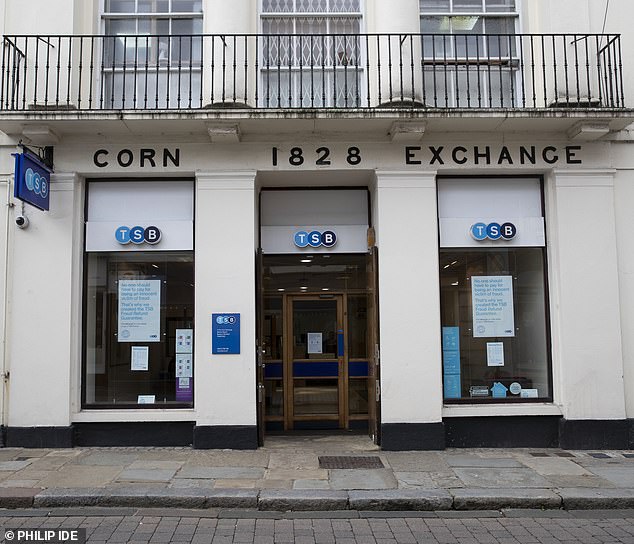 Test of time: The Old Corn Exchange in which the Bishop’s Stortford branch is housed was built in 1828 – 18 years after the foundation of the Trustee Savings Bank

Despite numerous requests from The Mail on Sunday, the TSB has refused to share details of the location of the 14 branches targeted for reduced counter services – only saying they are ‘dispersed across the country’. But if the move proved a success it could be extended across the network. Among those likely to be affected is the TSB branch in Bishop’s Stortford, Hertfordshire.

The Old Corn Exchange in which the branch is housed was built in 1828 – 18 years after the foundation of the Trustee Savings Bank (TSB) whose objective was to support the poorest parishioners. A far cry, some would say, from the ruthless money-making outfit it has now become – raking in pre-tax profits of £46million last year for its Spanish owner Sabadell.

Step inside the branch and you wonder what it has to offer customers. There is a grand foyer with three seating areas, but not a cash machine in sight – apparently as a listed building it cannot have one. At the far end is a single open counter that looks more like a reception desk for a fancy hotel when I approach the clear plastic screen. 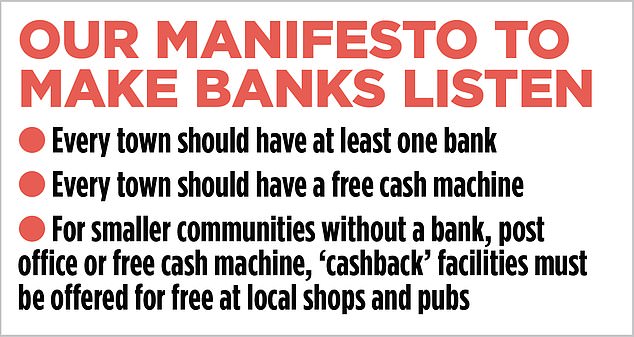 It is 11am, so I am well within business hours, but when I tell Michelle, the branch manager, that I am a journalist, she is perfectly polite but clearly wants me out.

The only up-skill training I get is on how to leave the branch quietly. I am escorted out the building.

Customers are far happier to share their thoughts about TSB’s depersonalisation of its branches. In a nutshell, they are aghast. Joan Deex, a retired health visitor, says: ‘I joined TSB a couple of years ago after staff at my previous bank, Barclays, told me it was time to bank online. It was not what I wanted so I moved to TSB.

‘What has happened to that once caring TSB that liked to say yes?’ she asks, adding: ‘Well, it will get a big no from customers like me if it starts pushing this ridiculous-sounding ‘digital up-skill’ idea.’ 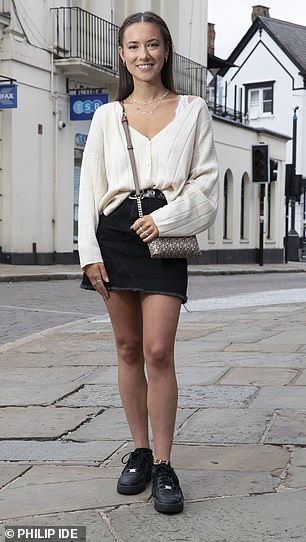 Friendly face: Student Karina Mann values being able to visit a high street bank so she can talk to staff about overdrafts

Joan, visiting the branch with her husband Len, 80, a retired science teacher, believes the bank is in no position to lecture customers about how to use the internet. Two years ago, shortly after Joan joined, it was landed with a £330million bill after a computer meltdown left 1.9million customers locked out of their accounts for several weeks.

Luis Pinto, popping into the branch to cancel a direct debit in person – he did not trust it would be done online – is unimpressed by TSB’s digital move. The 50-year-old former coffee shop owner says: ‘If I wanted to use the internet then I would – and I certainly do not need someone telling me how to do it. No one is fooled by the banks driving people online. It is all about saving money, not what customers want.’

Karina Mann and Gracie Leader, both 20, admit they do almost all of their banking online. But as university students they are well aware of the moments when a high street branch can prove vital for them.

Karina says: ‘There are times when I need to go into a branch and talk face-to-face to a staff member – for example when I need to extend my overdraft. Once a bank closes it will never reopen and we – the community – all lose out.’

On Friday, TSB told The Mail on Sunday that its digital up-skilling initiative was designed to help customers ‘make the most of online banking services’. It said if a customer really wanted to use a counter service after 2pm it would ‘try to find ways’ to ensure they could be served. It remained tight-lipped about how this might be done.

ONE BANK THAT IS STILL MAKING FRIENDS

Metro Bank, alone in expanding its branch network in recent years, has launched a ‘refer a friend’ offer to encourage customers to get their family and friends to open an account with the bank.

Customers will receive £50 every time they convince a family member or friend to open a bank account with Metro.

As part of the offer the new customer will also receive £50. The deal runs until mid-December and the maximum customers can receive if they make multiple recommendations is £250.

There are other conditions. For both the existing and new customer to get the bonus, at least £500 a month must be deposited in the newly opened account for the first two months. During this time at least ten purchases must be made on a Metro Bank debit card.

Once they have registered for the deal, existing customers will be sent a code that they can then share with friends and family to identify them as the person making the recommendation.

Other banks have offered similar schemes in the past including Nationwide Building Society, though it ‘paused’ its offer in April citing the coronavirus crisis.

Since its launch ten years ago, Metro has grown its network to 77 branches. Although most are in the south of England, it has opened branches this year in Liverpool, Sheffield and Cardiff.

From next month, almost all its branches will be open seven days a week – as they were pre-lockdown.

THIS IS MONEY’S FIVE OF THE BEST SAVINGS DEALS

Some links in this article may be affiliate links. If you click on them we may earn a small commission. That helps us fund This Is Money, and keep it free to use. We do not write articles to promote products. We do not allow any commercial relationship to affect our editorial independence.